Get the word out on this one!

Here's some info on the current situation and what "We the people..." can do.

Farrakhan on Obama: 'The Messiah is absolutely speaking''Barack has captured the youth,' will bring about 'universal change'

"You are the instruments that God is going to use to bring about universal change, and that is why Barack has captured the youth. And he has involved young people in a political process that they didn't care anything about. That's a sign. When the Messiah speaks, the youth will hear, and the Messiah is absolutely speaking."

Because of this, God greatly exalted him and bestowed on him the name that is above every name, that at the name of Jesus every knee should bend, of those in heaven and on earth and under the earth, and every tongue confess that Jesus Christ is Lord, to the glory of God the Father.

PRAY HARD & WORK FOR HIS GLORY!!

“A few parishioners left in tears” 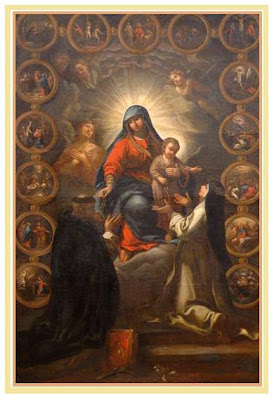 On-Line Tour of the Our Lady of Victory Basilica

7 October, Mass of the Blessed Virgin Mary of the Rosary

The Rosary in the Desert

"Place yourself in Mary's hands; she will think of everything and provide for the needs of soul and body. Therefore, be at peace, be at complete peace,with unlimited confidence in her!" St. Maximilian Kolbe


We have our weapon lets USE IT!
Please pray the rosary for: an end to the culture of death, our country, and the Presidential Election.
PRAY THE ROSARY!
Listen/download
Uncle Ralph and the Rosary


The Rosary Revives the Soul

This morning, prominent Philadelphia attorney and former Deputy Attorney General for the Commonwealth of Pennsylvania Philip Berg filed a Motion for Leave to File an Amended Complaint in his ongoing case against Illinois Sen. Barack Obama and others, arguing that Obama is in fact not a natural born United States citizen and, pursuant to Article II, Section 1 of the U.S. Constitution is ineligible to serve as president of the United States of America.

A Fight Among Catholics Over Which Party Best Reflects Church Teachings

Its going to get bumpy now...but that's ok...we know who WON!