Fr. Euteneuer - "An Open Letter to the Bishops of the Anglican Church"

Dear Right Reverend and Most Reverend Bishops of the Anglican Communion:
At the Lambeth Conference of 1908, your brothers of a saner age offered an unequivocal condemnation of the evils of contraception, abortion, and other degrading immoralities. One century later, in marked contrast, one quarter of the churches of the Anglican Communion are boycotting the Lambeth Conference because of homosexual activism in your ranks, capitulation to every form of political correctness, declining numbers, and the abysmal state of Anglican discipline throughout your church. This contradictory situation is entirely of your own making - it is not the work of the Holy Spirit - and there is really only one proper response that you could make to this desperate situation; namely, repentance and a return to true and full communion with the Church from which you were divorced by your founder.

With all due respect for persons and motives, the historical record of Anglicanism's doctrinal surrender has clearly prepared the way for the problems you are now having, problems which get increasingly worse as time goes on. The Anglican Church was created by an act of rupture of unity from the Church that Christ founded and its apostolic succession in 1534. It capitulated on the fundamental question of divorce and re-marriage in 1536; presided over thousands of unconscionable martyrdoms between 1534-1729; broke the centuries-old Christian consensus on contraception in 1931; took the unprecedented step of ordaining women priests beginning in 1944; caved in on abortion in 1967; allowed women's episcopal ordination in 1989; and endorsed openly gay clergy in 2003.

And to be blunt about it, just last week in London, two Anglican priests were "married" by a third Anglican priest in a public ceremony at the threshold of your conference - to make an obvious statement - and not a one of them has been called to account for his sin. How can this church be called a "communion" with anything other than the spirit of the age - any age? My purpose in listing these anomalies is simply to make the point that it's time to stop playing church and start getting back to church.

The present state of decline leaves little hope of your church's survival as a recognized body of Christian believers. A significant portion of your own bishops are so fed up with the betrayal of both doctrine and discipline that they are having a parallel conference in Jerusalem as you meet in the staid halls of Lambeth. This fissure will leave the Anglican Communion permanently damaged and demoralized. Not only that, but the contrast between the precipitous decline of the Anglican Church and the vibrancy of the Roman Catholic Church is nothing short of astounding. While Pope Benedict is in Sydney at World Youth Day evangelizing the future - Anglicans are wondering whether they have a future.

As you gather for your 14th Lambeth Conference I ask you to honestly face the truth of the appalling mess that your church is in and address it like true men and women of Christ, unafraid to confront the moral decay and doctrinal disorder in your ranks. The Anglican ship is sinking, not because God has abandoned you, but because almost five hundred years ago King Henry VIII cut you adrift in a turbulent sea of confusion, called human respect. We, as Roman Catholics, stand on the Rock of Peter and would welcome you generously back into the hold of his ship, assured that your homecoming would immensely strengthen the Body of Christ for the work of evangelizing the world. In the United States there are already five Anglican Rite parishes so a precedent already exists for receiving Anglicans back into true and full communion with the one Church of Christ! Undoubtedly, the Roman Church has enough life preservers for all our separated brethren when you are finally unable to hold off the onslaught of the winds and the sea.

A reflection of World Youth Day in Syndey

Feast of Our Lady of Mt. Carmel 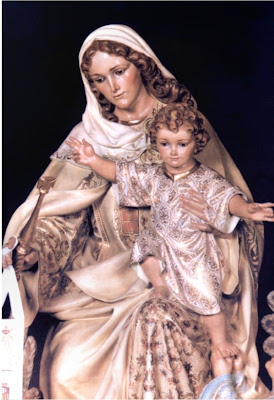 Happy Feast day! Go over and read Fr. Mark's post...thank you Fr. Mark! (btw...Fr. has changed the appearance of his site...looks good!)

“I have to do something,” he said in the interview. “I'm not going to just let this disappear. It's just so darned weird that they're demanding that I offer this respect to a symbol that means nothing to me. Something will be done. It won't be gross. It won't be totally tasteless, but yeah, I'll do something that shows this cracker has no power. This cracker is nothing.”

G'Day Pilgrims! Pope Heads Down Under

Holy Father sends first text message WYD participants -"Young friend, God and his people expect much from u because u have within you the Fathers supreme gift: the Spirit of Jesus - BXVI."

Statement in Regard to 'Tony Snow Family Trust'

My prayers go to the family.

Eternal rest grant unto him, O Lord, and let perpetual light shine upon him. May his soul and the souls of all the faithful departed, through the mercy of God, rest in peace. Amen.

Pilgrims can be annoyed: court ruling

"Student Government Senator Webster Cook filed the hazing charges with University of Central Florida administrators shortly after he admitted violating church rules by bringing the Eucharist home from Mass on June 29, then holding it hostage for one week in a plastic bag before returning it."
UCF Student Fights To Stay In School
Pray. Pray for Webster Cook...Blessed Mother take over!
at 7/15/2008 10:04:00 AM 2 comments:

'Union' for the Mediterranean